Art on the Town 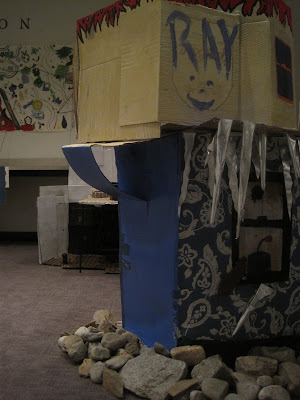 Friday night was the monthly Art of the Town here at the DCCA. The evening began with a presentation by Carrie Dashow and the kids

she’d worked with from the Latin American Community Center, The Geographers. An enormous globe shaped piñata hung from the ceiling in the lobby; covered in maps of Wilmington and the kids’ native countries as well as assorted flamboyant adornments it added a youthful feeling to the galleries. Sitting at a table near the door I was able to observe the excitement and surprise expressed by new arrivals at witnessing such an unexpected event. The piñata

itself was a “portal” to send one into Mesatly, a world created by the collaborative. The construction of the piñata was clearly more meticulous than anticipated, as it was quite a feat to break it open. After a few initial attempts the girls shied away for the most part but the boys eagerly stepped up for multiple turns with an ever increasing allotment of strikes per go. 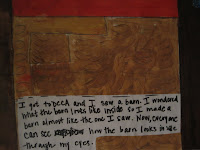 Finally, almost reluctantly, it submitted pouring confetti, candy and tokens created by the children onto the lobby floor. The kids wasted no time making sure all of the candy was accounted for. When they were finished the small tokens they’d made, a heart, a milk carton etc. remained amid the heaps of confetti on the lobby floor (much to the dismay of those responsible for sweeping it up). The objects were things of value to the kids that they wished to take with them into the future. With the portal breached the entire group moved to the nearby installation they’d created for a more thorough presentation of conceptions motivating the creation Mesatly. Stop in to see more, the work will be on view until July 23. (Above:Installation View and Detail) 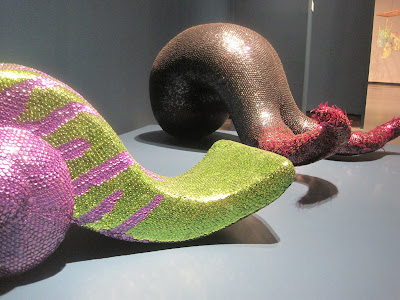 Shortly after a group of us moved to the E. Avery Draper Showcase where Joseph Barbaccia discussed Eight Currents, sculptures about harmony and balance in life. The works present timeless dichotomies, suffering vs. happiness, gain vs. loss, praise vs. ridicule. Crowded into the now blue room he took center stage as he introduced the work and the motivating mythology. Quickly it turned into a question and answer forum that he eagerly guided. The organically shaped pieces are covered in what must be thousands of sequins that create a beautiful, reflective, almost scaly surface. Several of the kids had joined the discussion and when it came time for questions one boy, one of the most enthusiastic participants in the fall of the piñata, could hardly contain his question. On Ridicule, which is comprised of green and purple sequins, he spotted one red one and wanted to know why. Barbaccia, clearly excited by the observation, said it is an homage to a Japanese tradition of deliberately denying perfection in order to avoid offending the gods. He went on to say there is one sequin in every piece that is out of place, which of course prompted every one of us to begin looking again from new angles. (Ridicule and Loss, Installation View)

For most the night was clearly full of familiar faces, with excited greetings, hugs and kisses. With the children from LACC and their families, as well as those who came just for Art on the Town, there was a sizable gathering, but the atmosphere remained very familiar and intimate, and certainly energized!

Members’ Evening is next Thursday! With food catered by A Moveable Feast, cotton candy from Thyme Catering, and exciting artworks it promises to be a fun, family friendly event. Everyone who has left his or her name for the drawing for a Free Membership at the end of the month is invited to attend for free! Hope to see you there.